Get all 48 issues of The Objectivist Forum—a $55 value—when you give a gift HBL subscription, good through next May, to someone not already on HBL—all for the incredibly medium price of $75.

Your giftee gets a subscription that runs from December 25th through May 31, 2021. (If you want it to start sooner, let us know; the end time, however, is immutable.)

But not only do you get a great gift to give, the main thing is that you get for yourself the 768-page book version of The Objectivist Forum. That $55 value is thrown in for free. 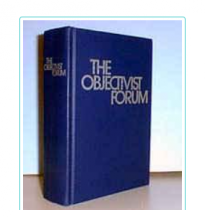 Before Ayn Rand died (in March 1982), she served as “philosophic consultant” (her term) for The Objectivist Forum. She read and approved my articles before they appeared and was informed in advance of each issue as to what other articles, by whom, would be appearing. After she died, Leonard Peikoff took over that role (for a couple of years only, as I recall).

The result is a collection of 768 pages with some really fine essays, including several by her and by Leonard Peikoff that have not been published elsewhere.

Here’s the list of their articles (both those republished elsewhere and those found only in TOF):

Both “Maybe You’re Wrong” and “Philosophy and Psychology in History” are extremely important articles, not available elsewhere.

I myself wrote 25 articles, some brief, for TOF. Here are the more important ones:

Other authors published in TOF include (in alphabetical order):

In addition to 48 16-page issues, there is a detailed, 10-page index. Index references to pieces by Ayn Rand are shown in bold. Here’s a sample of the index, to give you an idea of the range of the topics covered. Note that the entries under “A” continue on the next page (not shown). 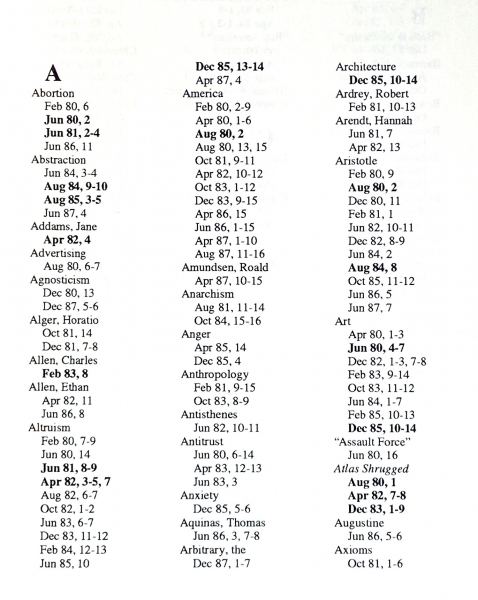 The book also includes the Announcements section of each issue. 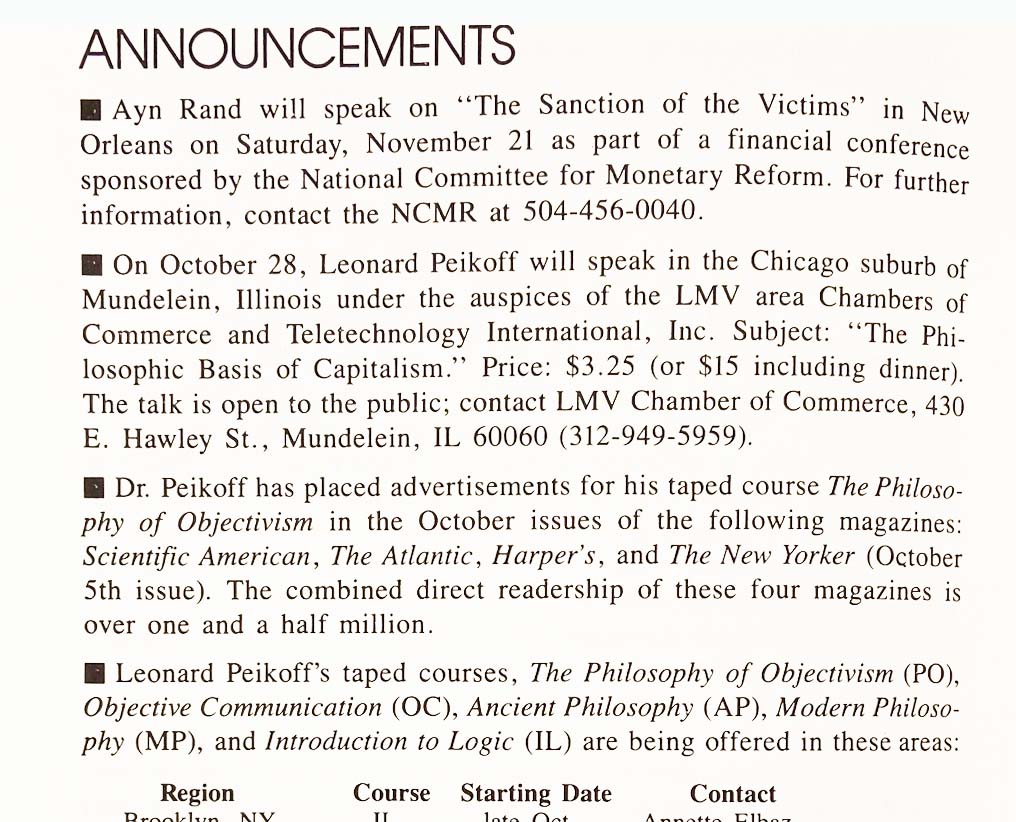 No extra shipping charge for books sent to addresses within the U.S. International shipping is surprisingly expensive, which has to be due to government-imposed obstacles to international trade. But I won’t charge you our full cost: ship to Canada for $25 and anywhere else for $40.

Law void where offer is prohibited.

Side effects include: pleasure, tingling, dropping of jaw, involuntary smiling, elevated brain function, and uncontrollable urges to burn a copy of The Critique of Pure Reason. Do not read The Objectivist Forum if you are taking crack cocaine, the holy orders, or a college course in hermeneutics.

Please email support@hbletter.com with any questions, problems, or suggestions.